Economic forecasts no better than a random walk

It is often said the so-called dismal science of predicting the economy is there to make weather forecasting look good.

The International Monetary Fund recently issued a mea culpa over its estimates for troubled European nations and the Reserve Bank has admitted that while its inflation predictions were right about two-thirds of the time, its economic growth forecasts were wide of the mark.

It may be a statement of the obvious, but forecasting economic activity is difficult. That is the view of the Reserve Bank in a recent paper looking at its predictions over the last 20 years.

"The unfortunate reality is that, in the area of forecasting, it is normal for forecasts of economic activity to be wide of the mark," said RBA deputy governor Philip Lowe to a gathering of economists in Sydney before Christmas.

"This is evident in work recently undertaken by two of my colleagues at the bank who looked at the history of our own forecasts."

That paper found that 70 per cent of the RBA's forecasts for underlying inflation for the year ahead were close to the mark, but its predictions of economic growth were less accurate, and its unemployment rate estimates no better than a random walk.

"The reality is that a random walk is what you would get from chance," said Bill Mitchell, a professor of economics at Charles Darwin University.

"The Reserve Bank employs numbers of people on very high pay and what they're admitting now is that their - all of this so-called science - has produced nothing more than what a roll of the dice could produce."

"What they were saying there is, particularly for growth forecasts or their unemployment rate forecasts, that they really weren't too much better than the consensus or even flipping a coin kind of forecasts," he explained.

"Statistically, you're not doing too much better than someone walking drunk down the road I guess."

Stephen Halmarick, head of investment markets research at Colonial First State and the Australian Business Economists group, says the RBA paper showed that economic predictions are not that useful.

"Most economists, including those at the RBA, are not actually not particularly good at forecasting some major economic variables," he said.

"When there's people's jobs and their livelihoods at stake, you want to be very careful in the way in which you impose policy changes based upon your technical forecasts," he argued.

"What we know is that the RBA has been error prone in its forecasts and then imposed monetary policy that was inappropriate and inappropriate for too long."

The media, companies and governments also closely watch the monthly figures from the Bureau of Statistics, for example, on the unemployment rate.

However, Justin Fabo says there is a wide range of error, as the bureau itself makes clear.

"On a monthly basis, the ABS are very transparent about this, that they say we've got a sample, we're not surveying the whole population," he said.

"If anyone's making decisions based on one month of data or two months of data then it's a very brave person indeed."
Eingestellt von HP um 20:29 Keine Kommentare:

Composite leading indicators (CLIs), designed to anticipate turning points in economic activity relative to trend, continue to point to weak growth prospects in many major economies, but signs of stabilisation are emerging in Canada, China and the United States. Compared to recent months where the CLI has pointed to a deteriorating outlook, tentative signs of stabilisation are also emerging inItaly. 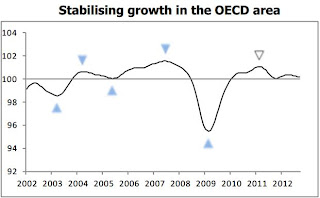 INDICATORS IN THE MEDIA 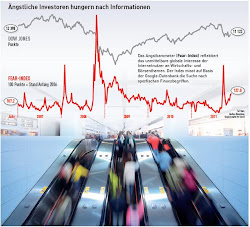